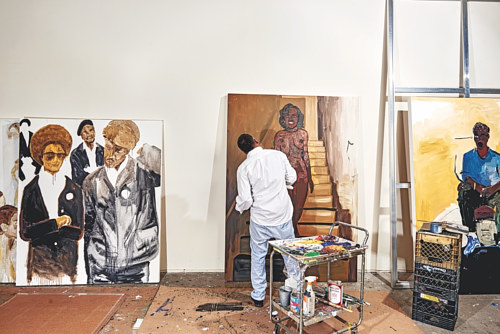 Henry Taylor is a painter currently based in Los Angeles, California. Taylor was born into an artistic family -- his father was a commercial painter -- and worked as a technician in a mental hospital for a decade before retiring and taking up painting full-time.

The artist is best known for his portrait works, which are painted in Taylor’s own distinctively vibrant and energetic style, often combining a reverence for contemporary art history with a sense of immediacy and play.

Taylor’s studio reminds me of that of painters Misaki Kawai or Kerry James Marshall. The large, person-sized works-in-progress leaning against the wall have a sort of casual feeling about them, and I can imagine the artist shifting between adding colours and elements to several different paintings at once.

Having the works leaning against the wall here, rather than stacked or on easels, also probably allows for easier viewing of a series of works next to each other. The placement emulates the placement of works on a long gallery wall. It looks like the artist is using the entire top of his table as a palette, with huge blobs of half-blended paint ready to be applied to the canvas. All the better for working on multiple large pieces at once!

Taylor has been known to paint on a variety of surfaces, often creating small, quick works on detritus like cardboard boxes and packaging, as though compelled to capture a subject as quickly and naturally as possible. The artist’s works have been exhibited in solo shows throughout the United States, including a retrospective at MoMA PS1.