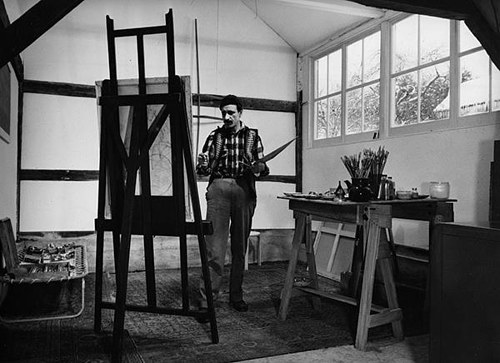 Arshile Gorky was an Armenian-American painter, born in what is now the town of Dilkaya, Turkey. Gorky is noted for his post-impressionist, and later, abstract expressionist painting style. The artist was based in America for the duration of his career.

Gorky looks like the classic image of an artist in this photo. His studio looks relatively small and sparse -- I see just one easel, and a wooden table that seems to hold almost all of the artist’s brushes and supplies. On Gorky’s right side there appears to be a cot of some sort that’s holding additional supplies.

The composition of this photo is interesting -- I like being able to see the artist work and yet not be able to see exactly what he’s working on. It lends an air of mystery to the photo and at the same time forces a focus on the artist himself. Outside of Gorky’s window, the landscape looks like it’s snowy and cold. The studio, though sparse, looks all the more cozy for it. I wonder if Gorky spent much time painting outdoors if the weather was pleasant.

Gorky is considered an important figure in American abstract expressionist painting, and had a profound influence on later contemporaries such as Willem de Kooning, Jackson Pollock, and Mark Rothko. Gorky passed away in 1948 in Connecticut.