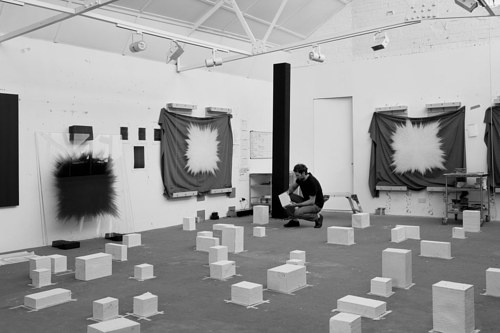 Today’ studio feature is London-based artist Idris Kahn. Kahn is known for abstracted artworks that exist between media, blending techniques of photography, sculpture, and painting to form art objects that are both technical fascinating and emotionally captivating.

I find the overall aesthetic of Kahn’s studio, pictured above, rather interesting. The artist’s space looks quite big, but it’s divided throughout by the series of small sculptural blocks that the artist appears to be working on. I wonder if these blocks are components of a larger sculpture, or waiting to be arranged as an installation in their own right.

Along the walls I can see some of the works that the artist is perhaps best known for -- explosion-like forms made up of paper documents (writing, music, and other forms of language), sometimes encased in glass and layered to create an even more interesting effect. Kahn’s studio space looks quite large -- we can only see a corner of it in this photo, and even here it looks expansive. I wonder just how many of these sculptural bricks filled the space when this photo was taken.

Kahn completed his Master’s degree, with a Distinction in Research, at the Royal College of Art in London. He is based in East London along with his wife, the sculptor and artist Annie Morris.