Inside the Art Studio of Hans Hofmann 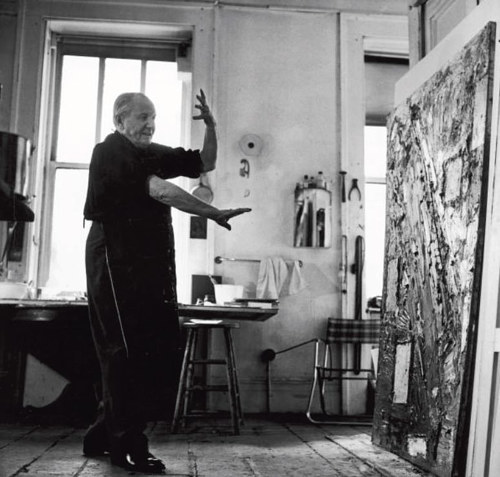 Hans Hofmann was born in Germany in the late 1800s, and became involved in the European avant-garde art scene before coming to the United States in the early 1930s. The artist was based in New York during the latter half of his career, and enjoyed notoriety as part of the inception of the American Abstract Expressionism movement.

The artist himself looks quite energetic in this photograph, even in a relatively small studio space. It’s almost as if the artist is in conversation with his work, planning his next brush stroke with a dance-like movement. It’s nice to see a space with such large windows, as well -- I wonder if the artist had much of a view from these windows, and if that view ever inspired his abstract works.

The studio around Hofmann appears sparse but not unwelcoming. I see some basic tools -- brushes, a pair of pliers, a small hammer -- hanging from the wall next to a desk. It’s difficult to tell exactly what the desk holds, but one would guess an assortment of paper and materials, perhaps for making sketches or planning the next masterpiece.

Hofmann was known during his lifetime not only as an artist, but as an art educator. During the early part of his career, in 1915, he established a school in Munich that focused on the work of modern artists such as Paul Cezanne and Wassily Kandinsky. He opened similar schools in the United States after emigrating, helping to bring modernism and abstraction into a more global sphere.