Inside the Art Studio of Joan Jonas 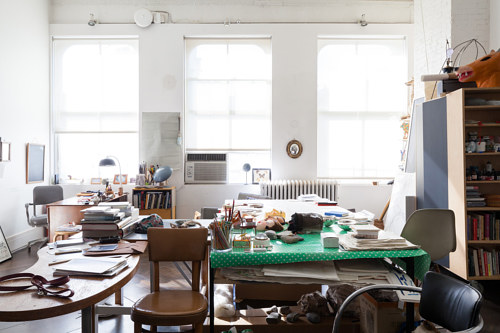 This Sunday, let’s take a step into the studio space of Joan Jonas! The artist was born in 1936 in New York, NY, and studied art history, sculpture, drawing, and choreography. Throughout her career, Jonas has been combining these disciplines and more, producing works of performance, film, installation, and large-scale sculpture.

Jonas’ studio space is also her home -- a loft space in SoHo, New York. The space overall looks quite beautiful, and I imagine that, as a loft, it has great views of downtown Manhattan. The three large windows in the background of this photograph seem to let in a stunning amount of natural light, and I imagine the artist must draw at least some inspiration from the hustle and bustle of the city below her like this.

There’s a real sense of organized chaos in this image -- though every available surface seems to be covered with paper, books, art materials, and other evidence of an artist hard at work, the sense of openness and cleanliness is still equally present. There’s enough space for Jonas to move between tables and desks, working on several different ideas at once. The idea of this being a home studio makes it easy to find parallels between Jonas’ studio and that of textile artist Ann Wood.

Jonas, now 82, is known as one of the most important women artists in the United States during the mid 20th century. The artist’s notable works have included films and performances around the world, and in collaboration with noted artists like Richard Serra and Dan Graham. Jonas is based in New York, but also spends part of her time in Cape Breton, Nova Scotia.