Maxim Zhestkov produces work with partners and collaborators under the umbrella of Zhestkov Studio. The studio’s artworks often utilize digital techniques to create futuristic impossible objects that defy the physical limitations of a gallery space. 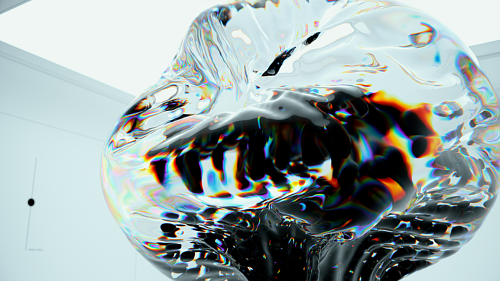 Much of Zhestkov’s recent work involves 4k animation, with animated objects often laid over images of gallery and museum spaces to help foster a more realistic, tangible presence. I appreciate the sense of tension, here, between the real and the imaged -- between the artistic potential of the future, and the limitations of current technologies and matter. The works are dynamic and fluid, and reference physics in a way similar to works by Amarie Bergman or Tomas Saraceno.

Zhestkov’s art film Supernova takes the idea of explosion as a destructive force and re-frames it as a process of creation. The animation, depicting millions of particles in a digital realm, builds on this idea, letting the viewer watch as a familiar structure dissolves into numerous particles of colour and light.