Inside the Art Studio of Cheng Ran 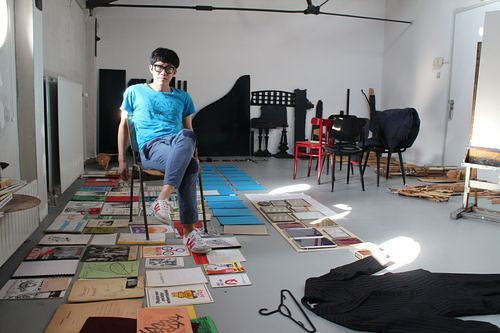 Cheng Ran is a conceptual artist currently located in Hangzhou, China. The artist works primarily in film, creating artworks that are frequently inspired by literature, cinema, and Western pop culture, as well as more esoteric ideas such as mythology.

Cheng’s studio here certainly gives the appearance of a space that’s used more for conceptual artworks than for physical constructions. Many of the artist’s works utilize video, projection, and other film media, so it’s likely that a lot of the work of assembling and putting objects in place is done on site, or at a location outside of the studio.

It’s always interesting to see a studio that’s obviously a space for ideation, planning, and research. I wonder about all of the papers or posters on the floor, under Cheng and extending further back behind him. The artist’s work often deals with discrepancies between “official” versions of films and books, and the bootlegged, altered versions that are often more widely available in China. Perhaps these are examples of book covers and posters that have been altered, or passages of text that have been edited or replaced.

The artist’s films are often non-narrative, combining hours of footage and sound in such a way as to evoke sentiment and feeling, rather than guide the audience toward any particular conclusion. Cheng was recently awarded the Nomura Emerging Artist Award.