Inside the Art Studio of Alan Bean 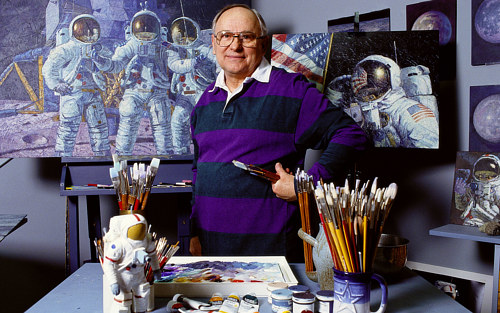 This week’s studio feature is Alan Bean. Bean was an astronaut and aviator by trade, with a love of art that he pursued outside of his aerospace career. Later in his life, Bean’s artistic creations were inspired by his time in space, with the artist often painting astronauts as subjects, and using tools and materials from space in the works themselves.

We can’t see too much of the artist’s studio in this photo -- it looks like a fairly small home space, with the artist’s paintings clustered around a small table on which he has his paints and brushes. Though the space itself isn’t very large, it has a cozy, approachable feeling to it and I get the sense that the artist was very at home in this space.

The homey quality of the studio reminds me of similar home work spaces, like that of David Shrigley. I also like the kind of unified colour scheme that Bean is working with -- the whole space seems to reflect the purplish, warm greyish tone that he uses for the surface of the moon and the textures of space suits in many of his paintings. I also really love the little astronaut-shaped brush holder in the foreground of the image -- the perfect studio accessory!

Bean passed away in 2018 at the age of 86, after an illustrious career in both space and painting. He is remembered both for his artwork, and for his part in the Apollo 12 lunar mission, which made him the fourth man to walk on the moon.