Inside the Art Studio of Lu Yang 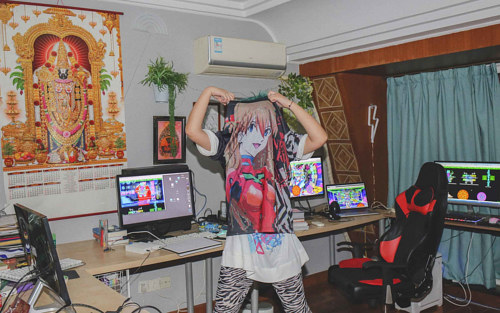 Yang’s studio looks at once familiar and bizarre -- there are elements here that seem like they could be found inside any suburban home or apartment. The large gaming chair, computer monitors, and various consumer electronic detritus seem as though they could be found in the home of most any video game enthusiast. Even the slightly incongruous wall-hanging artwork and the artist herself, sporting an outfit that seems to reflect the psychedelic visuals of her films, are straight out of an old film photograph found in someone’s basement or closet.

It’s interesting and oddly encouraging to see an artist’s studio that looks so unlike the (perhaps stereotypical) ideal image of such a space -- like those of, for example, Claude Monet or even Frank Stella in more current times. This space seems almost like a glimpse into the future of art-production -- a space where the only materials needed are compact and digital, and where the artist is relatively free from space or equipment constraints, beyond a decent hard drive and the right software.

Yang’s works often deal with death as a subject, and though her aesthetics and techniques are modern and even futuristic, her subject matter often brings in buddhist notions of spirituality and elemental awareness.