Inside the Art Studio of Marisa Merz 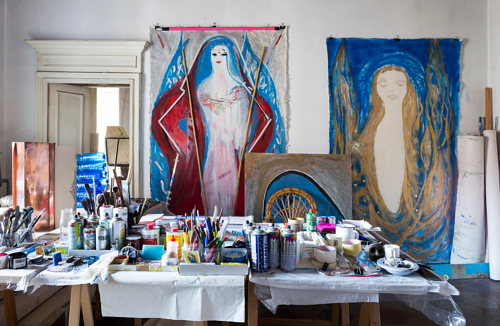 Marisa Merz was an Italian artist, born in Turin. Merz had a long and prolific career, beginning in the 1950s and 60s during which time she was the only female member of the Arte Povera movement. Arte Povera (translated to English as “poor art”) was a radical artistic movement that stood in opposition to the hierarchical, capitalist nature of the art industry of the era.

Throughout her career, Merz worked in a variety of different media, from wax sculpture to more traditional modes of painting. It’s the latter that seems the focus in the studio pictured above. The table in the foreground of the image is packed with bottles of paint, canisters of spray paint, brushes, and various other materials. There’s a lot to pick through, a lot for the viewer to imagine being utilized by the artist herself.

The paintings in the background of the image, though, seem to command the most attention. The abstracted, almost ghostly human figures on these tall, human-sized panels feel like a physical presence in the room -- making the absence of the artist herself all the more conspicuous. The room feels bright and sunny, and the table is well prepared for a full, productive day of painting -- there’s a sense here that the studio is never quite complete without the artist herself.

Merz produced numerous artworks during her career, often utilizing traditionally feminine, craft-oriented materials such as textile to produce works in keeping with the Arte Povera tradition. Despite her prolific production, the artist did not receive her first major retrospective until 2016, at the age of 90. Merz passed away in July of 2019 at the age of 93.