Inside the Art Studio of Julian Opie 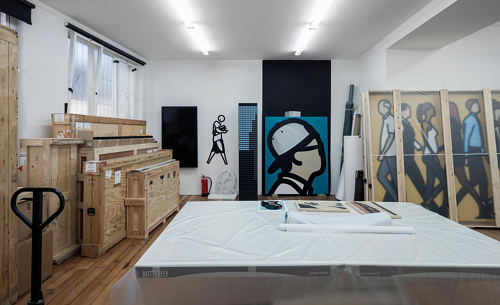 Our studio Sunday feature this week is Julian Opie. The artist, currently based in Shoreditch, East London, is known for his bright, stylized figure paintings and is often identified as part of the New British Sculpture Movement -- a circle of British artists who began exhibiting sculpture (among other types of artwork) in the 1980s.

The paintings behind the table, against the wall, creating an interesting appearance for the studio space. The human figures, all apparently looking off into the distance or going about some business of their own, lend the studio a sense of being occupied, even when there isn’t anyone physically present. There’s plenty of space for paintings here, and plenty of space for quite large paintings in particular. The small window pictured on the left side of the room here lets in a small amount of light, but the space still feels large and bright, in part thanks to the ceiling lights

Throughout his decades-long career, Julian Opie has produced both painting and sculpture. The artist has a distinctive pop-art style which often features flat planes of colours and simplified figures with deliberately cartoonish features. Opie has been producing work since the 80s, but his style seems particularly well-suited to the internet era.