Inside the Art Studio of KAWS 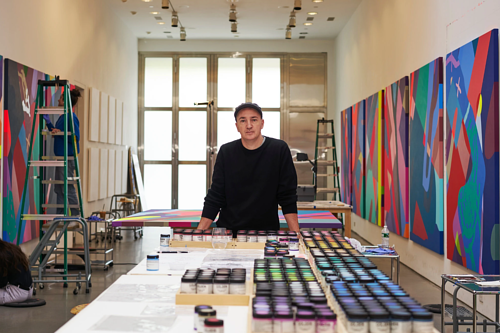 American artist and designer Brian Donnelly works under the studio name KAWS, producing colourful sculptures, screen prints, paintings, and other artworks that draw on cartoon and graffiti aesthetics. KAWS is currently based in Brooklyn, New York.

KAWS' studio looks very organized -- I'm especially drawn to the rows and rows of small lots of pigment on the table in front of the artist. They're so uniform and nicely placed that they look more to me like palettes of eyeshadow than pigment for paintings.

The studio itself looks brightly and warmly lit, almost like a gallery in the midst of an exhibition install. Ladders and tables are placed throughout the space, in front of the colourful artworks on the go, and I can just see a studio assistant seated in front of one of the works on the left side of the photo. It looks as though this space (or this area of a larger studio) is devoted exclusively to painting. The artist undoubtedly has a dedicated workshop for the production of his sculptures and other small-scale mass-produced pieces.

KAWS' artworks exist in public collections in New York and around the world, and the artist's pieces are also collected by prominent musicians and celebrities. Outside of his personal practice, the artist frequently collaborates with other artists and designers to produce clothing and other art objects such as skate decks.