Inside the Art Studio of Keith Sonnier 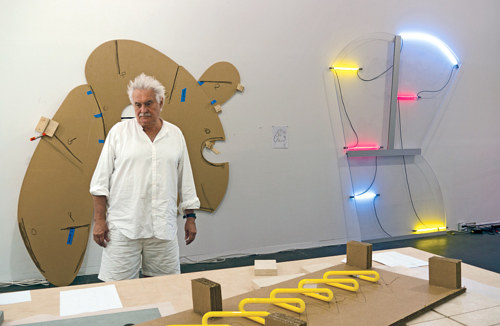 This week, let’s take a look inside the studio of Keith Sonnier. Sonnier was born in Louisiana and began experimenting with novel art methods and materials in the 1960s. The artist quickly became enamored with the medium of neon, and has since produced countless works that place neon in new and fascinating configurations and contexts.

Sonnier’s studio looks like an art installation in its own right here -- the space is clean, with white walls reminiscent of a gallery space, and even the cardboard mock up behind the artist has a certain aesthetic quality about it. It seems like we’re seeing artworks in several different points of their product process here -- on the right side of the image is a work that appears almost, if not quite finished, while on the table there’s what looks like components still being assembled.

This reminds me of the studio space of Tracey Emin, another artist who works in neon. Like Emin, I’m sure that Sonnier has different spaces or areas of the studio devoted to different aspects of the production process. Since neon is such a technical medium, I wonder if the artist outsources the production of the actual lighting elements, providing manufacturers with detailed instructions first.

Outside of neon, Sonnier has experimented throughout his artistic career with various materials, attempting to explore the limits of sculpture and of what can be considered sculpture. Sonnier has produced works in performance and video, as well as using found objects and materials, textiles, paint, and beyond. The artist’s works have been exhibited and collected throughout Europe and North America.