A Brief History of Black Pigment

Black pigment is so ubiquitous in art that artists often don’t give it a second thought. We write with it, sketch with it, and use it to create shadow, volume, and atmosphere in paintings and drawings both realistic and abstract -- but rarely do we examine the symbolic or historic concepts that we might be reinforcing or defying with our use of it. 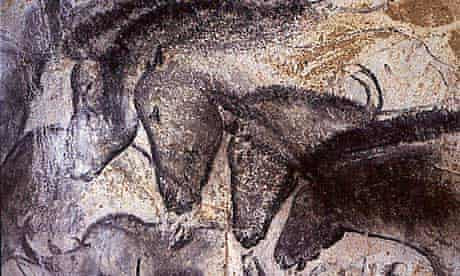 A detail of charcoal paintings in a cave in southwest France, estimated to be around 30,000 years old

Whether you’re an oil painter or a photographer, chances are you’ve used or at least considered the colour black in your artwork, whether in the form of straight-out-of-the-tube pigment, or a darker mix of colour for shadows and negative space in a scene. But sometimes black is still seen as either a forethought, for underpainting and sketching, or an afterthought, for adding shadow and line detail.

Read ahead to discover how paying more attention to this essential pigment can help you create artworks that are deeper and more engaging.

A little physics refresher: light is made up of particles called photons. In order to see, normally functioning human eyes rely on data created by photons bouncing off an object or surface, through the pupil, and onto the retina. Regardless of how large and close an object is, if there aren’t any photons to bounce off it -- or if the object absorbs photons rather than reflecting them -- we won’t see anything. In the absence of light, our surroundings tend to appear dark or black.

The blackest objects are those that absorb almost all the photons that hit them, reflecting very few. The darkest spaces are those where photons from the sun can’t reach, like a cave deep underground, or are otherwise so dispersed that they may as well not be there at all -- for example, the void of interstellar space, where any light-producing star is so far away that light must travel thousands of years to reach any observer, and is necessarily diffuse and weak by the time it gets there. While plenty of art pieces have taken advantage of darkness due to a lack of photons (think of installations or performances taking place in darkened rooms), for the purposes of this article we’re going to focus on black pigment -- black of the light-absorbing variety.

In art, black has a storied history, beginning from neolithic cave paintings in which artists used charcoal -- the by-product of burning various materials, including wood, plants, and animal products. Over time, through centuries of trial and error, humans began to understand more about how the burning conditions and starting materials could be manipulated to affect the final texture and colour of the charcoal. Charcoal could be pressed into dry sticks, or it could be powdered and mixed with water or other media to create inks and paints. 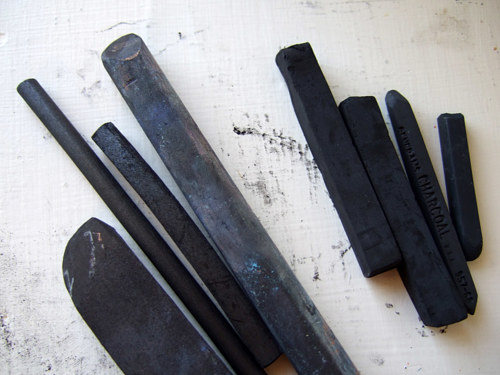 Charcoal pressed into sticks for drawing

During the renaissance, artists commonly worked with lamp black, a pigment made from the soot of oil lamps. Ivory black was originally made from charred ivory, though more modern iterations use animal bones sourced from butchers. Mars black is made from synthetic iron oxides (so named for Mars, the Roman god of iron).

Black ink dates back to the 23rd century BC, in China, where it was originally made by mixing charcoal powder with water. Later variations, such as India ink, were made using powdered bone char and burnt ivory, similar to ivory black, or bone black as it’s sometimes called today.

If you’ve ever walked through the aisles of your local art supply shop and wondered why there are so many different kinds of black paint, the difference is down to ingredients and ratios. It is, in other words, a very subtle difference, but one that will have an effect on your final product. For example, ivory black usually has brown undertones and is better for general use, while mars black is darker, and will produce stronger results when mixed.

Despite the proliferation of different tones of black pigment, many artists will tell you that using a black pigment straight from the tube produces sub-optimal results. Of course, when people say this they are generally talking about figure painting and not geometric abstraction like that of Kazimir Malevich’s Black Square. That said, a lot of artists tend to mix their own “blacks” using dark shades of various colours of paint, creating the appearance of shadow rather than a flat black. A common black is a mixture of blue and burnt umber, known as chromatic black. 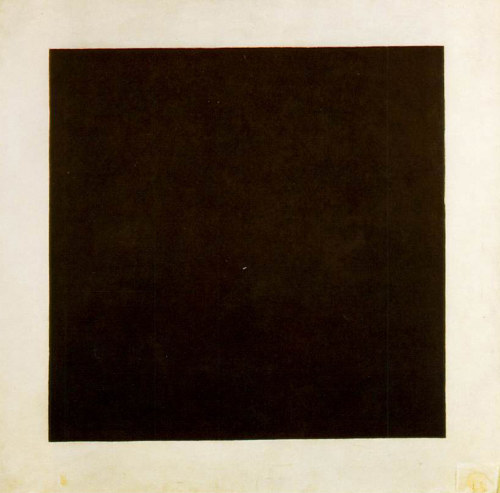 One popular approach to laying black into a painting is to use a pigment called Payne’s grey instead. Payne’s grey is not a black pigment, but rather a very dark grey with blue undertones. The blue tones of Payne’s grey are a closer analogue to the way shadows appear to the human eye, and thus the pigment lends itself to more realistic shadows and undertones. In real life, even the darkest shadows at night are not completely pitch black. At dusk or in the shade, it’s still possible to see colour, but these colours are often muted, greyed out, or more blue-toned than they are in daylight (just as colours often take on orange overtones under lamplight). 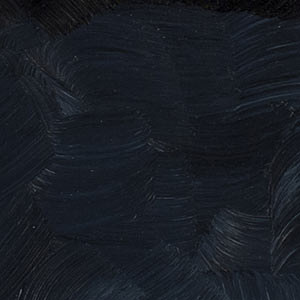 A sample of Payne’s grey

When you’re learning to paint figuratively, or if you’re trying to paint a realistic scene, it’s important to consider how lighting influences the colour of shadows. Some infiltration of light allows for a sense of value and depth, with occasional details. You can look at a deep black piece of fabric and still understand its volume and shape through the visibility of texture and folds. Unless you’re in a cave far underground or floating through the vacuum of space, you’re unlikely to encounter pure, valueless black in everyday life.

Even John Singer Sargent, famous for his paintings that incorporated striking dark shadows and black fabrics, rarely applied black pigment directly to the canvas. Sargent’s black shadows and clothes were often said to be rendered in a mixture of ivory or mars black, mars brown, and paint medium, lending them a richness and weight that would be very hard to achieve with straight-out-of-the-tube pigment. 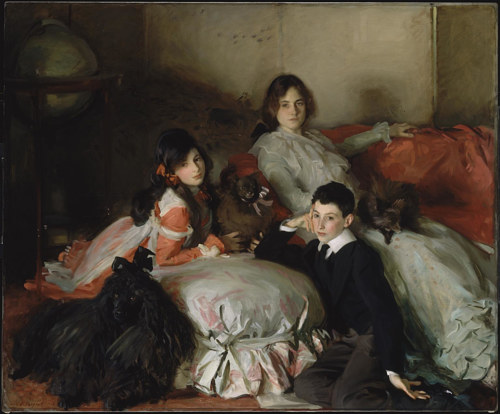 The impressionists like Claude Monet almost never used black pigment -- the abstracted nature of impressionist painting lent itself well to a more varied palette. Monet would often use a blend of blues, greens, and reds to create darker, shadowed pigments.

If you’ve been around the art world at all in the last 5 or so years you’ve probably heard of Vantablack -- the “blackest black” ever invented. 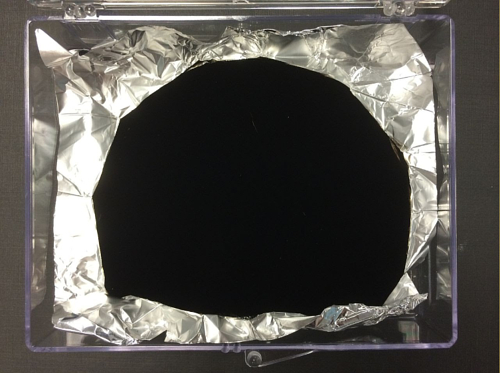 The now-iconic photo of Vantablack applied to crumpled aluminum foil, obscuring the topography of the material

Anish Kapoor’s “ownership” of the Vantablack pigment is old news at this point -- it’s been much lampooned throughout the art industry, and Kapoor’s name has become something of a joke even among those less tuned-in to the art industry at large.

Despite all the drama, Vantablack was never created with art in mind. Scientists have long been working on hyper light-absorbent materials with the intent of using these materials for things like stealth aircraft, space telescopes, and other precision instruments where even the tiniest amount of light interference would be a detriment. Vantablack itself isn’t the kind of material that could be reasonably made commercially available. It essentially has to be “grown” on a desired surface, so it can’t be bottled or mass produced in the same way as other art media, nor can it be applied with a brush or pen. Due to import restrictions and its unique properties, it can’t be mass-produced or sold outside of the UK, as of this writing.

Vantablack absorbs almost every photon that comes into contact with it. As previously mentioned, if no photons are bouncing off of a surface, then the human eye doesn’t have enough information to work with and a person looking at that surface won’t be able to see its topography. This is why objects coated in vantablack don’t just look like they’re painted black -- they look like they’ve been deleted from reality, because we can’t perceive their volume at all. A black like this mimics the kind of all-encompassing blackness that you would find in a cave or deep underwater, where no light can reach. It’s not practical for most realistic or figurative paintings since it doesn’t offer the richness, volume, and texture that chromatic blacks are used for.

That said, not every artist wants to paint realistically, and there are plenty of applications for a really dark black in contemporary art of all media. Vantablack itself may be off the table, but there are plenty of commercial alternatives that offer a similar, if slightly less intense, effect. 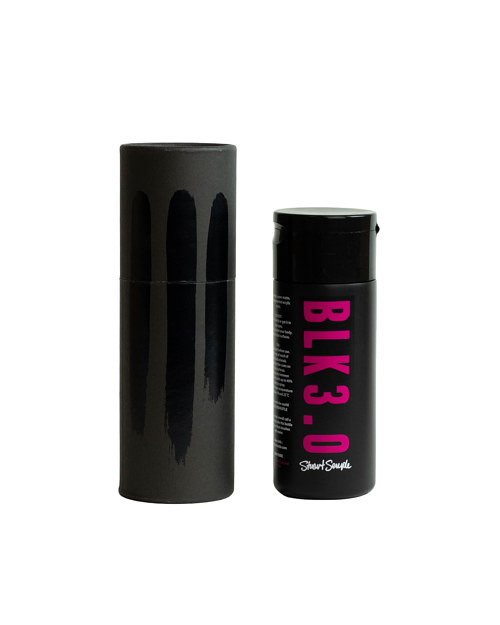 Vantablack isn’t even the blackest black anymore -- MIT has invented a material that absorbs more light, and other institutes are racing to beat it. It’s not different enough from Vantablack to warrant another artistic exploration, just a little more effective.

Why Use Black in Your Work?

There’s no reason why you should or shouldn’t use a particular pigment in your art. It goes without saying that whether you choose to mix a chromatic black, use black straight from the tube, purchase some Black 3.0, or eschew darker shading altogether depends entirely on your painting style.

Colours evoke a wide variety of different emotions and memories for individual people, and they also often have varying cultural, social, and historical significance. A quick google search about black pigment will tell you that throughout the centuries, black has been used in artwork to symbolize death and mourning, as well as to convey ideas of elegance, opulence, and power. It’s no coincidence that Sargent’s black-clad subjects were so often members of the elite class. In deciding whether a particular pigment has a place in an artistic composition, it’s just as important to consider your intended meaning as it is to consider aesthetics. 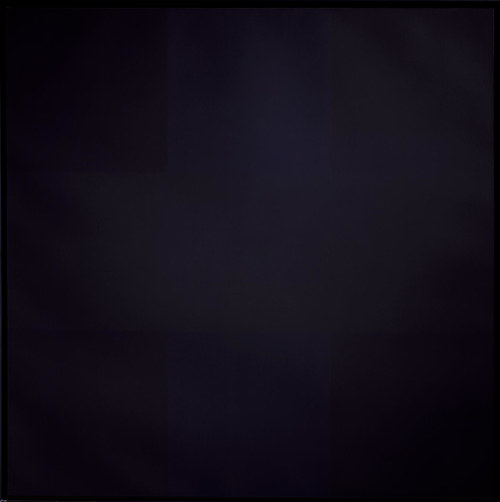 Ultimately there are no hard and fast rules in art, and you are free to use (or not use) black

pigment however you see fit. Learning a thing or two about the background and history of a pigment, though, can enrich not only the aesthetics of your artworks, but your own experience creating the work, and that of your viewers.