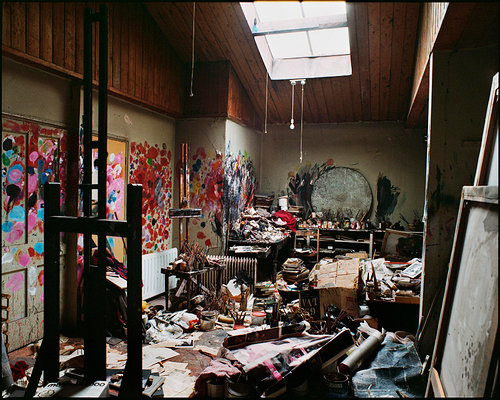 For Studio Sunday this week we’ll be taking a look inside Francis Bacon’s studio at 7 Reece Mews, in London. The above photo was taken in 1998 – while Bacon passed away in 1992, his studio remained exactly as the artist left it, until it and its contents were donated to a gallery in Dublin by Bacon’s heir.

To me, the idea of a studio remaining empty and untouched for 6 years after the death of its resident artist is somehow very eerie – but this is in line with Bacon’s famously uncomfortable style of oil painting. Looking at the space, deep, cramped, and cluttered with painting supplies that seem to spill out of every corner, I can imagine spending a great deal of time in here would drive a person to create such bizarre, nightmarish images.

Bacon did not become a serious painter immediately, rather spending his early adulthood painting occasionally and earning his living in other jobs. He was in his mid-thirties when he painted Three Studies for Figures at the Base of a Crucifixion, considered by some to be the painting that drew his work into the public eye, and gave him the impetus to become a full-time artist. Bacon’s work is divisive at the best of times, and has throughout its history been both hated and adored – though it has been increasingly in value steadily since his death.