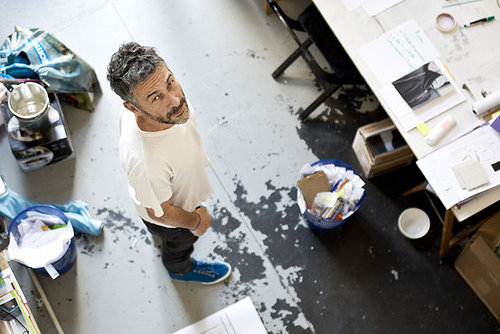 Pierre Huyghe, the focus of this week’s Studio Sunday, is a French artist who uses his practice to build environments and stage situations. Huyghe’s Paris studio appears large, and naturally lit – a typical example of a modern artist’s studio, with a large table in the centre, buckets of paint and sketchbooks strewn in every corner. The source for the above image even mentions a bubbling aquarium, a smaller version of one of the many “situational” art pieces in the artist’s body of work.

Huyghe likes to look at relationships and reactions between objects, people and animals, and the way that situations unfold once certain parameters are set up. Chaos and failure are necessary parts of art, and Huyghe celebrates these inevitabilities in many of his pieces. In A Journey that Wasn’t – a 2005 project that is now immortalized in the form of a film, he searches in Antarctica for an albino penguin, a journey destined for failure. In his piece for the most recent Documenta exhibition in Kassel, Germany, in 2012, he created an entire environment in the wilderness, with moments of sculpture, as well as the organic contributions of various plants, and a dog conscripted to wander throughout the contrived outdoor environment