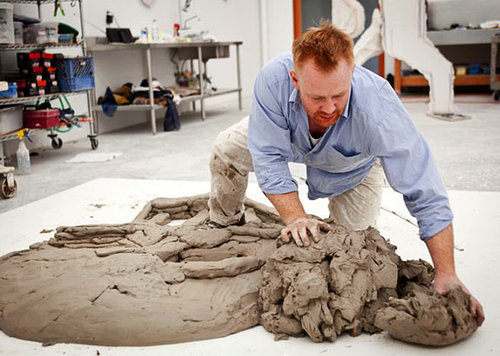 This Studio Sunday, we take a peek inside the Los Angeles studio of Thomas Houseago, a sculptor who works in materials like plaster, iron and bronze. His sculptures tend to be figurative, and draw from classical sculpting tropes, but are more like the sculptural equivalent of gesture drawings than they are realistic.

Houseago owns an entire studio building in Los Angeles, which itself takes up an entire city block. The building is divided up into some related offices, a studio for drawing and several for sculpting, including a cleaner studio space where he displays his finished or nearly finished work. Houseago employs around 20 people to help him maintain his studio operations, including clearing out all of the plaster dust and unusable scraps of material once a week to keep things from getting too cluttered. While Houseago’s studio sounds a bit like a factory, it is still Houseago himself who plans, draws out and sculpts his own works.

Sculptures by Houseago seem to carry with them some element of classical sculpture, particularly in the way he poses his figures, often in the middle of aggressive or very expressive patterns of movement. However, where in classical sculpture the features and body of the figure might be rendered to be perfectly realistic, Houseago chooses to keep his sculptures vague, expressionist, almost unfinished-looking. For instance, many of the works appear as a façade – a fully formed positive image on one side, and on the opposite, what looks like a hollowed out mould. I really enjoy the way these sculptures draw the viewer all the way around them, in order to discover the hidden back side of the work.