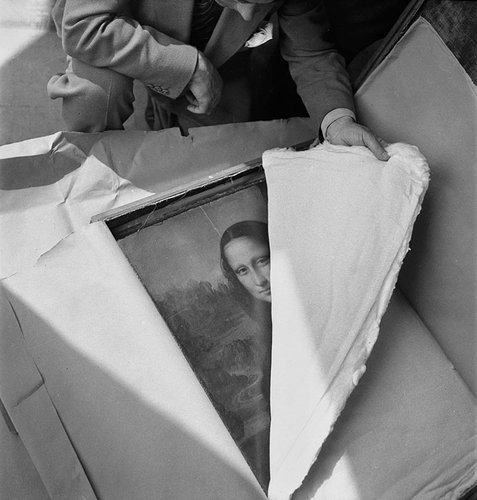 During war art objects are often looted or destroyed. It's interesting to see how valuable art is by the way it is treated in war times and how in the face of cultural oppression art symbolizes something that is precious, vital and worth hiding, protecting, destroying or stealing. Statues are demolished for the strength they symbolize and art objects are stolen for their financial worth, both actions show that the art has perceived value be it monetary or symbolic. The excerpt below is taken from an article from Twisted Sifter.

"Beginning in 1938, the threat of war prompted a large-scale evacuation of France’s public art collections. The storage sites chosen for works of art were châteaux, tranquil locations in the heart of the French countryside, far from strategic targets, and thus escaping the imminent danger of bombing.

On August 28, 1939, the Mona Lisa left the Louvre and on September 3, as war had been declared, a decision was taken to ensure that all of the most precious works would leave the premises by the end of the day.

During the war, Leonardo da Vinci’s smiling maiden would move another five times before being brought back safe and sound. It was an unprecedented journey for the world’s most famous painting."