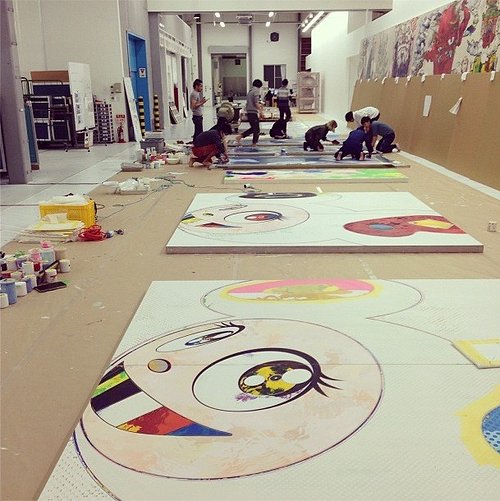 Check out the studio space of Japanese pop artist Takashi Murakami! Murakami is internationally known for his sizeable pieces often using repetitive patterns and duplicated images which emulate and anime, pop-art “superflat” style of cartoon artwork. To accommodate the scale and assembly-line type style of working required by his art, Murakami usually employs studio assistants to help him create the artwork, a few of which you can see in the above photo.

Aside from the bustle of many studio assistants, Murakami’s studio is somewhat sparse. Stark, factory-like, with bright white lights and very tall ceilings, the studio space is great for large scale work, as well as certain processes like spray painting which require extra ventilation. There would also have to be plenty of space for drying and storing artworks.

The idea of the artistic “factory” is something that Murakami carries over into his other endeavors. In 1996, Murakami founded the Hiropon factory, which was an organization of people who were, at the time, painters and sculptors assisting him in his workshop. The factory grew into an institution devoted to the promotion of young artists, the production of artwork, and the promotion and organization of art-related events, all helping to support and continue the arts in Japan and on an international stage. In 2001 the Hiropon factory evolved into Kaika Kiki, which upholds the same values and today employs about 50 people in Japan and about 20 people in its American office, located in New York.