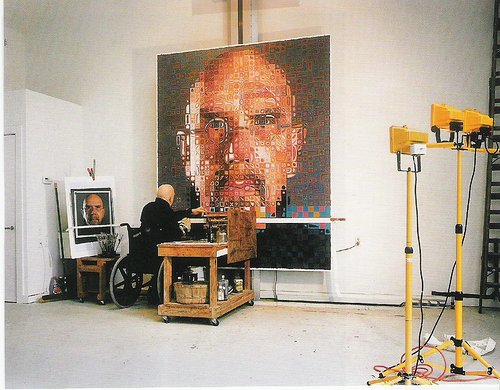 Our Studio Sunday artist this week is Chuck Close! You’re probably familiar with Close’s work – his unique process for creating large-scale, incredibly realistic portraits has garnered attention from galleries and art-appreciators the world over. Today we’ll look inside his studio.

In 1988, Close suffered a seizure that left him paralyzed and mostly bound to a wheelchair. Close has adapted his studio to suit his mobility, keeping his paints and brushes on a moveable trolley, and creating his large paintings out of smaller sections, allowing him to always be working at the same height. While Close’s New York studio is large enough to accommodate several of these large paintings at once, his actual working area is pretty much limited to the supply trolley and the segment of painting he is working on - a very compact workspace within a larger one.

Close is afflicted with face blindness, a neurological condition which makes him unable to remember the faces of people he meets, even those he is close to. His painting practice thus began as a way of overcoming this condition by cataloguing the faces of the people he knows. Since he became paralyzed, he has devised a new way of painting by dividing a face into a grid of coloured pixels. Each pixel seems abstract up close, but when viewed as a whole they form amazingly realistic faces.