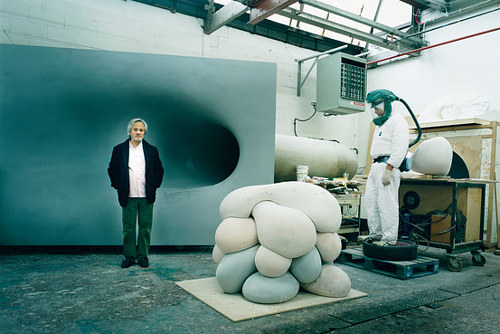 It’s Studio Sunday again, and time to pay a visit to the studio of Anish Kapoor. Kapoor is a London-based artist perhaps most famous for his public sculpture Cloud Gate, currently installed in Millenium Park in Chicago. Many of Kapoor’s works are public sculptures, installed and exhibited in cities including Paris, London and New York. He’s known for making giant, soft-edged shapes that are a good definition for what many people picture at the mention of the term “public art.”

Pictured above, Kapoor’s studio appears to be quite spacious, with high ceilings, concrete floors, and an almost cold warehouse-like atmosphere. The way his assistant is dressed, wearing a mask and protective clothing, indicates that there is probably a lot of spraying of paint and adhesives going on. Like other big-name artists such as Thomas Houseago and Takashi Murakami, Kapoor probably employs a number of assistants and his studio likely has multiple spaces in which different projects are on the go. This way Kapoor is able to get help working on multiple projects of such large scale.

I’m interested in the work in progress behind Kapoor in the picture. It seems like a tunnel that at first appears to be a two-dimensional work but extends further back. The piece in front of the artist, with the appearance of a pile of large bean-like shapes, might be a prototype or mockup for a much larger version to come. Kapoor uses his artworks as a way to explore the physical nature of space, and his large-scale pieces seem to bend and distort space itself.