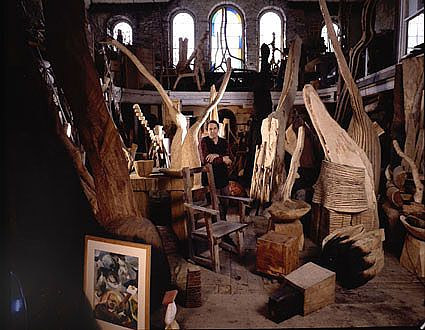 David Nash is an English artist who is best known for his wood sculptures, and natural artworks which he creates by manipulating and sculpting living trees. The artist tends to carve his works roughly with a chainsaw, as well as occasionally charring the wood for a rustic, blackened effect.

Nash’s studio looks like a strange forest from a fantasy or sci-fi novel. The space is filled with trees or large chunks of wood in various stages of becoming sculptures.

In the above photo of Nash’s studio, as well, the lighting in the space seems suitably dramatic, filtering through all these monolithic structures to make it seem like every time the artist steps into his studio he’s stepping into a scene from a movie. The cathedral-like windows at the top of the back wall seem to let in just enough light – though it’s likely the studio is equipped with other types of lighting or more windows.

Considering the implements that he often uses to create his works – namely, a chainsaw and sometimes a blowtorch – it’s likely that Nash does a lot of his work in the outdoors. This would be especially true for his work with live trees, such as his 1977 work Ash Dome, for which the artist trained a ring of ash trees to grow into a dome shape over time.

The artist’s obsessive use of wood and natural materials reminds me a little bit of the blob-like sculptural forms of Martin Puryear. Nash is a member of the Royal Academy of the Arts, and was awarded the Order of the British Empire in 2004.