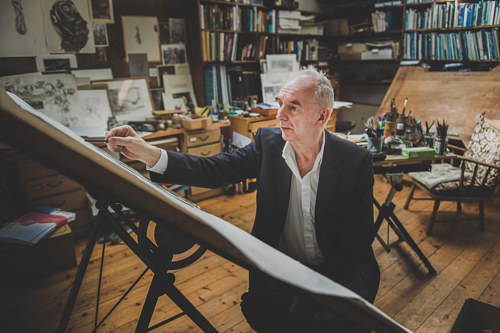 Our Studio Sunday artist this week is Alan Lee. Lee is a British artist who creates book illustrations as well as concept designs for movies. Working most often in watercolor and pencil, Lee is best known for his fantasy illustrations including those in editions of classics like The Lord of the Rings and The Hobbit.

Lee’s studio looks like the perfect cozy illustration studio. It reminds me a little bit of the studio of Art Spiegelman, another well-established illustrator. Lee’s large drawing table is a quintessential bit of illustration equipment, as are, it would seem, the shelves filled with books that can be seen in the background of the image. Perhaps a number of these are editions that Lee himself has illustrated. Some of Lee’s works are pinned up on the wall behind him as well, and though they're a little difficult to make out, one can imagine these appearing in the pages of a manuscript or on a novel's cover.

Behind Lee is a table that appears to be covered with various art supplies like inks, brushes and classic fountain pens. I like the rustic, almost old-fashioned furnishings that are housed in Lee’s studio. The warm tones of natural wood go well with the inviting, fantastical worlds that the artist creates while he’s drawing. Lee’s works are often incredibly dense and detailed, and it’s easy to imagine the artist sitting for many hours in this space working on a single image.

Overall, the space is quite an inspiring one. Thus far, it has inspired Lee to create works that have won academy awards for best production design, as well as numerous awards for literary illustration.