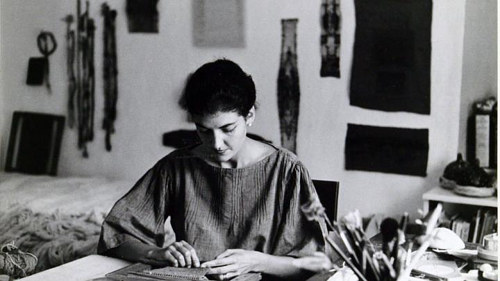 Our Studio Sunday artist this weekend is Sheila Hicks. Born in Nebraska, Hicks worked in Guerrero, Mexico from 1959 to 1963 before relocating to Paris, France, where she is still based. The artist has spent the majority of her career working in textiles, using sculpting, weaving, and assemblage techniques to create unique objects.

The photo above shows Hicks at work in her studio several decades ago, possibly in Mexico. Here, the artist’s space seems calm, orderly – even slightly sparse. Hicks appears hard at work on a project.

I’m curious about the small woven pieces hanging from the wall behind the artist. Hicks is known for drawing inspiration from regional weaving techniques of various cultures, consulting with members of communities about their different methods of creating textiles. I wonder if these pieces are samples acquired in her travels?

While the dense, colorful bundles of thread and fabric that appear in the second photo have a bit more pop, there’s still a sense of neatness and order to the whole space. Perhaps the rest of Sheila’s studio could look something like that of Robin Kang, who also works with textiles – though in Hicks’ case, especially in the above photo, she likely would have been working on a traditional loom rather than an electric one.

In recent years, Hicks has been experimenting with bundling fabric – among many other small found objects and materials -- to create tightly wrapped, free-standing objects that have a fascinating sense of tactility.

Throughout her career, Hicks has also worked in photography, snapping images of her local landscape and associates and fellow artists. Her works have been shown in numerous solo exhibitions across the globe and included in public and private collections.