Inside the Art Studio of Carlos Cruz-Diez 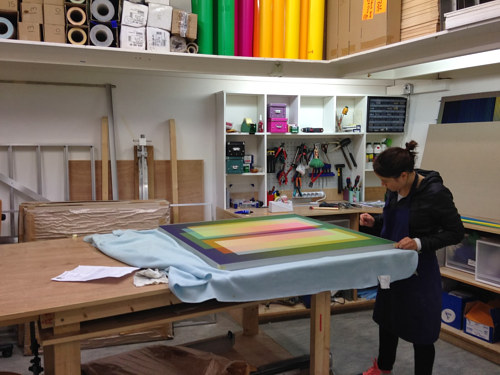 Carlos Cruz-Diez was born in Caracas, Venezuela, before relocating to Paris, France to pursue his artistic career. He opened studio spaces in both Venezuela and Paris, remaining in the latter city after 1960. The artist’s works took colours and simplified forms and elevated them to a visual space that vibrates with energy.

Cruz-Diez, who passed away in July of 2019, employed studio assistants and in fact had multiple studio spaces each devoted to a particular element of his practice. He had several different spaces in Paris where artworks were produced in various media -- some kinetic, like the work of Len Millward, and some paintings in the same vein as fellow op artists like Bridget Riley.

In this studio above, one can guess at the work being done. There are hardware tools on the back wall that seem like they could be used for building canvas stretchers or even producing sculptural works. Rolls of coloured paper or gel line the top shelves -- I wonder if these bright patterns of raw materials served as a source of inspiration for later finished works.

Cruz-Diez was a member of the Op Art movement, championing notions of the eye being somewhat more fallible than we often like to believe. His artworks were visually challenging, and produced different effects depending on where the viewer was standing, and how close. The city of Caracas honoured Cruz-Diez in 1997 when it opened the Carlos Cruz-Diez Print and Design Museum.