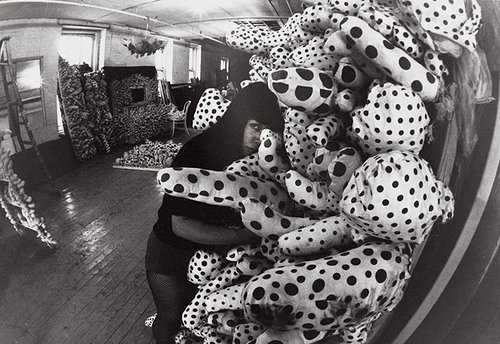 This Studio Sunday we explore the creative space of Yayoi Kusama, a Japanese installation artist most well known for her large scale pieces featuring many circular or spherical components laid out on a plane or surface.

The photo above was taken in 1963 or ‘64, and features Kusama in her New York studio, working on components of Accumulation. Because of the sculptural, environmental nature of much of Kusama’s work, her studio would have been a place of fabrication, and the assembly of the pieces would have happened on site. In many photos Kusama’s studio appears large, clean and well-organized, a state that is in both in line and in contrast with the dense, psychedelic patterning of much of her work.

Kusama has been open about the way her own anxieties and neuroses influenced her artworks, and I’m sure this idea of channeling discomfort into creativity is something that many of us relate to. Kusama’s work is meticulous on such a large scale that it does certainly take on an obsessive quality that is fascinating and rewarding. On a lesser scale, Yayoi Kusama has participated in critique of the over institution of art – once getting kicked out of the 1966 Venice Bienalle for selling pieces of her Narcissus Garden for the equivalent of $2 – a price that officials decided was insultingly cheap for an art piece.