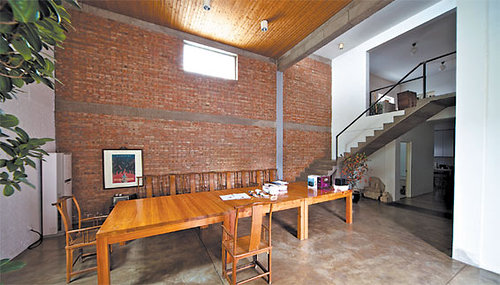 Today on Studio Sunday we’ll take a look at the home studio space of Ai Weiwei. Ai Weiwei has long been known for his politically charged and controversial artworks, many of them in protest against the policies of the Chinese government.

The artist’s home and studio in Beijing is an expansive compound, almost like a guarded fortress. Inside, the décor is simplistic, with the textures of hardwood, brick and concrete, high ceilings and stark lighting. Ai’s work spans many genres and styles, occasionally manifesting as sculpture or painting, though he is more known for conceptual public art, music, and architecture.  With such a varied body of work, his studio must also be quite large, and equipped for working with as many different materials as possible.

Ai is far from alone in this large space. Aside from a veritable army of devoted fans and supporters outside his home, he employs volunteers and workers to help him execute his artworks on a larger scale, and he also lives with his wife and child, and several cats. The image of cats wandering through Ai’s cold, expansive studio is quite beautiful – I’d love to be able to share a studio space with some sleek, mysterious cats!

The studio compound of Ai Weiwei has been compared to the “factory” style studio of Andy Warhol, and I can certainly see some parallels.