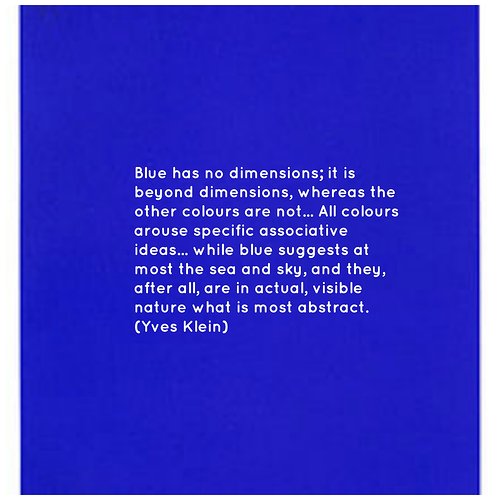 All colours have the power to seduce, they call from the paint box and bring magic to the canvas. I did at one time receive a threat from my painting instructor that he would remove all my tubes of blue paint if I didn't stop using it so much. I loved blue. At the time I just didn't see the point of other colours. Blue was everything. Which is why I relate so much to Yves Klein's quote about blue above.

Yves Klein abandoned the use of other colours after show a series of monochrome paintings in various colours and realizing that people wanted to decorate with them. He was absolutely horrified and the solution was - go blue or go home.

"From the reactions of the audience, [Klein] realized that...viewers thought his various, uniformly colored canvases amounted to a new kind of bright, abstract interior decoration. Shocked at this misunderstanding, Klein knew a further and decisive step in the direction of monochrome art would have to be taken...From that time onwards he would concentrate on one single, primary color alone: blue." - http://en.wikipedia.org

"The installation of Pure Blue Pigment, a large box on the floor filled with dry blue pigment recreated for the Hirshhorn exhibit, presents us with what Klein called “a force of attraction that directed only toward itself,” an attraction seemingly borne out by the fact that only days into the show several visitors had to be escorted by guards downstairs to wash their hands, so irresistible did they find the pigment’s incitement to touch." - http://zoolander52.tripod.com

Another artist who fixated on the colour blue was Pablo Picasso. From 1900 to 1904 Picasso had his "Blue Period" of painting. This painting period was triggered by the suicide of his friend Carlos Casagemas. The desolate mood of the painting is utilizes blue in a sombre and sad way to reflect the despair of the people depicted. 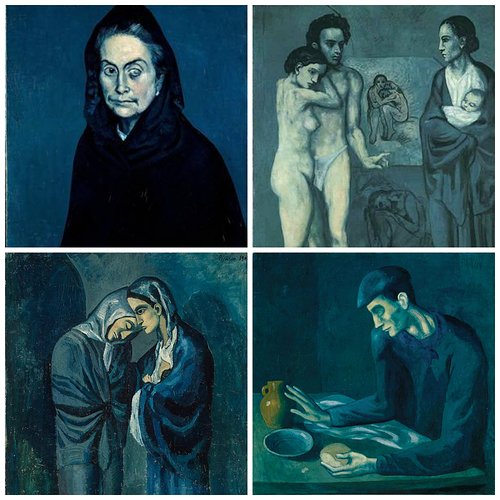 "An ever returning theme in Picasso's blue period (and also in his rose period) is the desolation of social outsiders, whether they be prisoners, beggars, circus people or poor or despairing people in general. Not only did this theme answer to his blue mood, but it also answered to the zeitgeist (the spirit of the time) of the artistic and intellectual avant garde at the beginning of the twentieth century."- http://www.pablopicasso.org