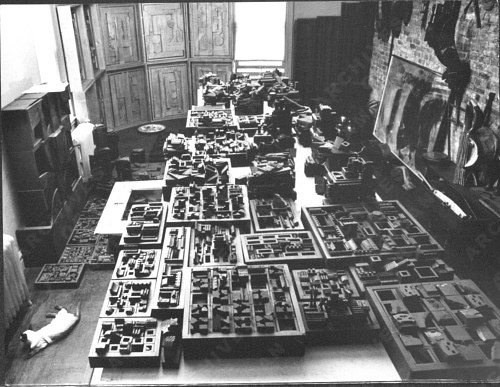 Our Studio Sunday artist this week is Louise Nevelson. Born in 1899 in what is now Russia, Nevelson moved to American with her family at the turn of the 20th century and, based in New York, became known for her monochromatic abstract sculptures.

Nevelson’s best-known works are abstract assemblages composed of many smaller, three-dimensional blocks and pieces, giving them an almost puzzle-like aesthetic. Assembled on a horizontal plane, the works were often displayed standing upright, lending them an interesting, multi-dimensional quality.

In this photograph we see Nevelson’s tightly packed studio table, covered in the same small forms that the artist liked to work with. The space is quite interesting – it may be just the lighting in this image, but the room has an almost spooky atmosphere to it with the dark wood and all these little mysterious components, as if the artist is building some sort of great machine on the table.

That table takes up almost the entirety of Nevelson’s studio, as well. There’s not room for much else besides the work, and whatever supplies would be required to complete it. The artist was probably very focused in this space.

I also love noting the studio cat on the floor to the left of the table. The pet adds a sense of homey warmth to Nevelson’s studio – like other cat-owning artists like Maya Lin, or Ai Weiwei. Nevelson had her first solo exhibition in 1941 in New York. Today her works are honored by a downtown New York sculpture garden, called Louise Nevelson Plaza.