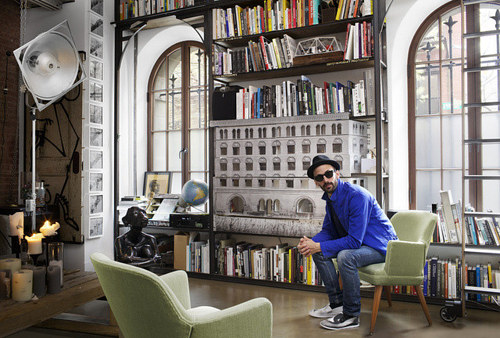 This week’s Studio Sunday featured artist is JR. JR is a French photographer who’s become associated with street art and graffiti art movements by his large, blown-up black and white photographs that are often installed outdoors, in public spaces. The artist is very private about his real identity and is known only by his pseudonym.

JR’s studio looks quite sleek – I love the big bookshelf behind the artist, that looks like it holds a good number of tomes. Maybe they serve as visual inspiration, or light reading, or perhaps JR is just a collector of books. Part of the shelf is taken up by what looks like a paper sculpture of a building. This could be one of JR’s works, perhaps a work in progress or an old sketch or mock-up.

I’m really interested in the selection of large candles that the artist has burning in the corner, under the photo lamp. Are these just a bit of mood-lighting for the artist? Does he tend to burn candles in his studio? Either way, they’re an interesting addition to an already interesting space.

Th artist himself is wearing his trademark sunglasses – the artist is never seen without them in interviews or publicity features. JR’s insistence on remaining semi-anonymous creates an interesting artist persona; his real life and his artwork seem to blur together.

JR began his artistic career as a teenager, when he tended toward more traditional forms of street art like graffiti and tagging. Since graduating to his photographic medium, the artist has gained some notoriety. In 2011, JR won the TED Prize, and used the prize money to start Inside Out, an ongoing global participatory art project.