Inside the Art Studio of Ron Nagle 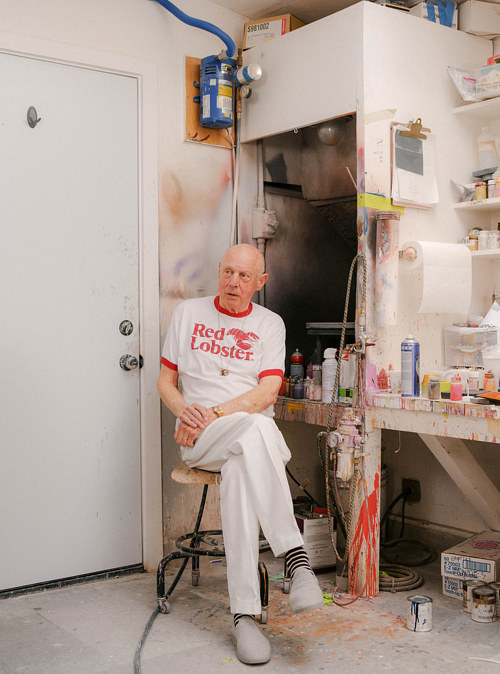 Our Studio Sunday feature this week is Ron Nagle. Nagle is an American ceramic sculptor, as well as a musician. In his artistic practice, Nagle is known for small-scale ceramic works that boast a significant amount of detail and a wide palette of bright, saturated colours. The artist has been based in California for much of his life and career, and his works are influenced by West Coast surf and hotrod culture.

From the looks of this small corner of the artist’s studio space, there’s a lot of spray-painting and glueing that goes on with the artist’s work. I like seeing a space like this where the walls and floor seem to become as much an artwork as the finished pieces themselves. It reminds me a bit of the studio of the late Joyce Pensato, who had a huge amount of paint splatter everywhere in her studio.

The artist himself seems at home, perched on a small stool, and it’s easy to imagine him bent over this desk here, sitting or standing, working on some small piece in a similar fashion to Curtis “Talwst” Santiago. At the very beginning of his artistic career, Nagle spent time studying jewelry design, and it seems like that eye toward small-scale, detailed handiwork still shines through even in his recent works.

Though they are influenced by various elements of California culture, and by other artistic movements, Nagle’s sculptures are quite abstract and have a distinct aesthetic all their own. Though the finished products may appear deceptively simple, Nagle’s painstaking approach means that each one is exacting in its shape, dimensions, colour, and presence.